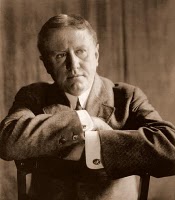 O. Henry Middle School is named for William Sydney Porter, better known by his pen name of O. Henry. A prolific short story writer in the early 1900’s, Porter lived in Austin from 1884 to 1895, working at the General Land Office as a draftsman and at the First National Bank of Austin as a teller. In 1894 he wrote, illustrated and published a weekly ten page paper called The Rolling Stone. Although the paper had a sizable circulation, the venture was unsuccessful.

Porter moved to Houston in 1895 to write for the Houston Post. A federal audit of the bank he had worked at resulted in charges of embezzlement, though his guilt remains a topic of debate. Porter fled the country to avoid trial, but returned to Austin when his wife became gravely ill.

Sentenced to prison in Ohio, he began to write short stories under the name of O. Henry to support his daughter. After his release in 1902 he moved to New York City where he began his successful career as a popular writer of short stories. During his lifetime he published over 600 short stories, and was famous for his surprise, or “twist” endings. Some of his most well known stories are The Gift of the Magi, The Ransom of Red Chief, The Cop and the Anthem and The Furnished Room.

The Austin History Center has a wonderful collection about O. Henry’s years in Austin. The O. Henry Museum is located in a former residence of William Sydney Porter, and the General Land Office where he worked is now the Capitol Visitors Center. The former US Post Office and Federal Building at 601 Colorado was a courthouse for the US District court where Porter was tried and convicted. The building is now owned by the University of Texas, and was renamed O. Henry Hall.

You can read O. Henry’s works at The Literature Network.

O. Henry has undergone two major renovations, with the most recent in 1999. Marlo Malott is the current principal, replacing Pete Price who served 16 years as principal. Rodger Wiley served 13 years as principal in the sixties and seventies.